Analog design is much more complicated than digital design and is getting more complicated (and expensive) with each smaller geometry node.  Most System on a Chip (SoC) IC’s designed today are actually a combination of analog and digital sub-circuits, also known as mixed-signal. Although digital design techniques have greatly improved in capacity and throughput to handle ever-increasing complexity, Analog design hasn’t changed much, yet, the analog circuits are required to be developed quickly and in a deterministic fashion and must also respond to advanced node process complexity. STI has invented a structured approach comprised of physical IP and automation extensions to achieve analog design with a design process that is ten times faster than the traditional approach and is able to deliver robust circuits in a SoC context. In short, we have embedded the art of analog design into a structured design framework.

ADONIS has been designed to minimize any disturbance to industry standard design flows which results in very low effort adoption and usage. STI’s approach to structure has two core elements, the constructs controlling the physical circuit elements and the simplification of the circuit implementation.

Fig. 1 is an example of our Correct-by-Architecture physical construct. 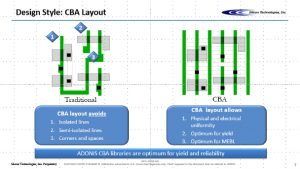 There are two things at work here. It is obvious that with the CBA layout on the right, it is the same circuit but benefits from the removal of isolated lines, semi-isolated lines, and corners and spaces—all lithography and yield challenges at advanced node. It also follows that there are circuit benefits from the physical and electrical uniformity. The CBA cell construct is also ideally suited for MEBL fabrication. Less obvious is that STI has embedded years of analog design expertise in the selection and design of the CBA cell set in the library. The second area is in simplification of the circuit implementation. 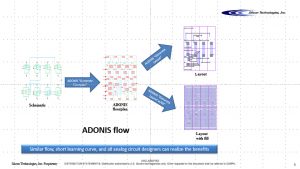 Fig. 2 below shows the ADONIS flow that leverages the CBA library IP. The flow looks familiar in the area of topology exploration with the schematic view. The innovation here is that the schematic symbols are tied to CBA library cells. These cells are supported with Verilog-A representations as well as non-extracted and fully extracted SPICE models.  In addition the cells are also DRC/LVS/DFM clean at the cell level. In this way, the circuit designer already has visibility into 80% of the layout dependent effects while refining the circuit topology. Once the designer is satisfied with his circuit topology, the select “floorplan” and ADONIS then generates a floorplan view. The floorplan symbols are accurate in terms of boundary and connections and allow physical topology adjustment without going to detailed physical design. The circuit designer now arranges his floorplan using the ADONIS floorplanning utilities. When satisfied, the circuit designer then selects “route” and ADONIS automatically routes the module. The designer now does final performance simulation and final DRC/LVS. The use of the CBA cells has simplified convergence by promoting the physical information earlier in the design process. The flow is simple because it uses standard EDA tools and only extends capabilities in floorplanning and routing that leverage the CBA library IP. The final point is that ADONIS also gives the designer the choice to automatically insert the foundry fill so final performance simulations can be as accurate as possible.

ADONIS enables significant benefit to the analog and mixed signal design community by addressing the cost and complexity challenges of advanced node analog mixed-signal design. ADONIS has been designed to minimized disruption to the existing EDA environment. This makes the benefits listed below readily accessible by any design team skilled in the art of analog design.